At the beginning of 20th century, Lucien Ernouf, Master Mariner has already completed seven round the world on prestigious three or four-masted who liaised between France, New Caledonia and Chile, through the Cape Horn : prodigious time or the commanders of these sails cathedrals were often less than twenty five years!

Lucien was one of those adventurous men after stopping navigate, was launched in several cases before the operation of a shipping line between Chausey and the mainland.

Its ships, the Dream and the Seagull and the Albatros, now embark a population of vacationers beginning to show interest in these islands until frequented by quarrymen who extracted the granite.

In 1928, Lucien Ernouf buys his hotel Madame Moulin. To do this, he partnered with Louis Renault, the car manufacturer, recently arrived on the island, with whom he became friends.

It was at this time that the establishment definitely takes the name of « Hotel du Fort et des îles ». In the following years, several managers succeed in control of the hotel: Jules Quinette until 1932, then Mr. Rosas until the declaration of war and finally Mrs. Blondeau in 1946 whose memory is still alive among some Chausey residents.

In 1971, management was taken over by the family.

Now, after 130 years of business, the Hotel of Chausey is still run by descendants of Lucien Ernouf.

The whole history of the hotel

1860 - The Office of Military Engineering

Start of construction of the fort. An office of military engineering was built in northern gulf, near the construction site. This small building, originally intended to house the officers responsible for monitoring the progress of work, is now encompassed in the Hotel of Chausey, which it is the oldest part. 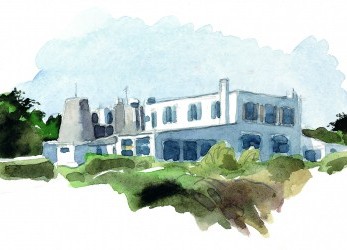 The former Office of Military Engineering is abandoned after the completion of the construction of the fort. A turret, the Baudry tower, for alignment to delimit oysters fishing areas between Granville and Cancale is built on the southeast corner of the building. It’s always in the back of the hotel. 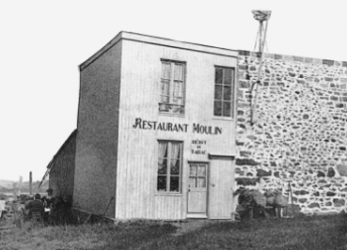 Pierre Moulin, carrier and fisherman in Chausey, built a wooden hut built against the north of the former office of military engineers to make a tobacco office. He holds the modest establishment with the help of his wife, Emily Osmond, herself the daughter of the carrier.

The successful business and gradually begin serving food to tourists. 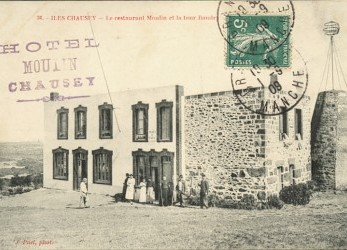 Encouraged by this success, Moulin gets a lease from the town of Granville to enlarge the facility and turn it into a real hotel. Permission is granted on condition that the construction is provided with a flat roof : it must not interfere with the artillery batteries of the fort, on the orders of the Ministry of War ! Now we smile when we know that it was never fired a single shot from the building, but it has the explanation of this architectural oddity : Hotel Moulin, as it was then called, is actually the only house with a flat roof… 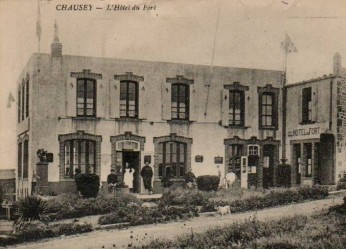 Death of Pierre Moulin. His wife has entrusted the management of the property in Donville wine trader, Louis Quinette. This undertaking several expansion work, including the new extension, called  » Bel Air », based on the south face of the former office of military engineering. He also built extra rooms in an adjoining building called  » Annexes  » and a small barn in shelter use called  » Les ronces « . Finished in 1914, the hotel now has the appearance that it has retained to this day. 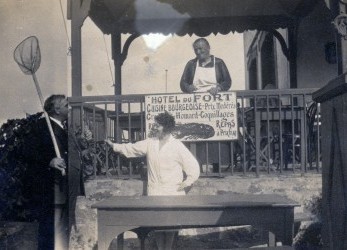 In the years after the war, the ongoing conflict between the descendants of Quinette and Emilie Moulin, who is still owner of the hotel, pushing the latter to sell its establishment. It was at this time in 1928 that Lucien Ernouf said the acquisition of the Hotel which later became the « Hotel du Fort et des iles ».

We use sweet cookies to ensure you the best experience on our website. If you continue to use it , we will consider that you accept the use of cookies.Ok